I'm waiting for confirmation from BugGuide and iNat, but I'll add them tentatively to the LQA taxa list.

I replaced my 20-year old compost bin with a new one -- and I found two new LQA taxa in the process. 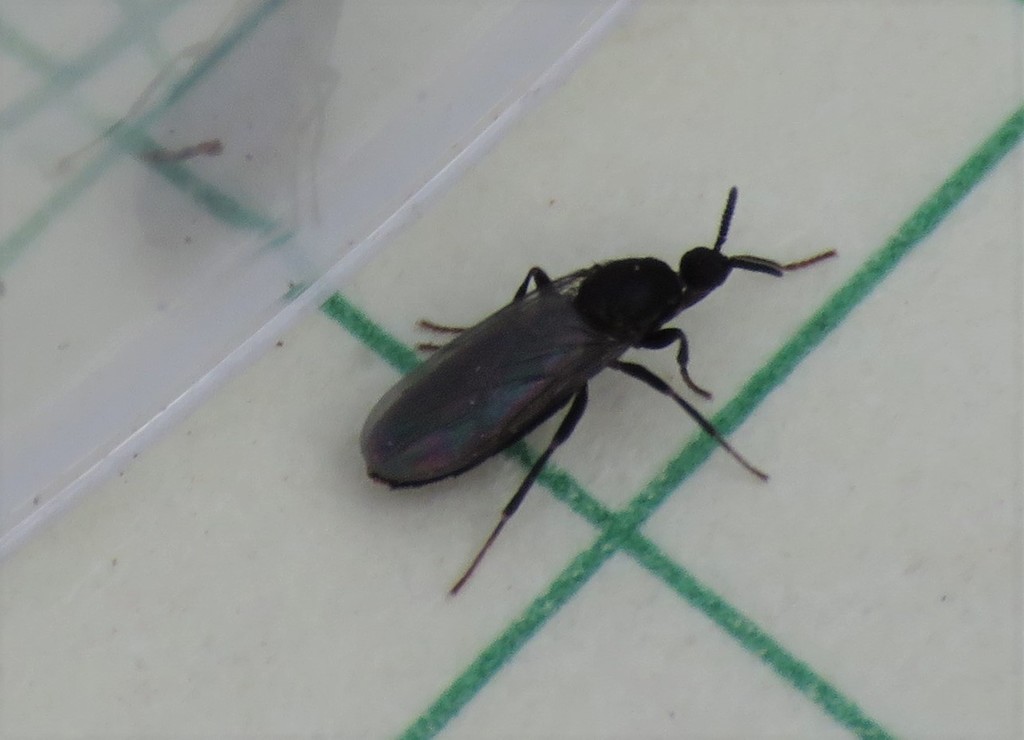 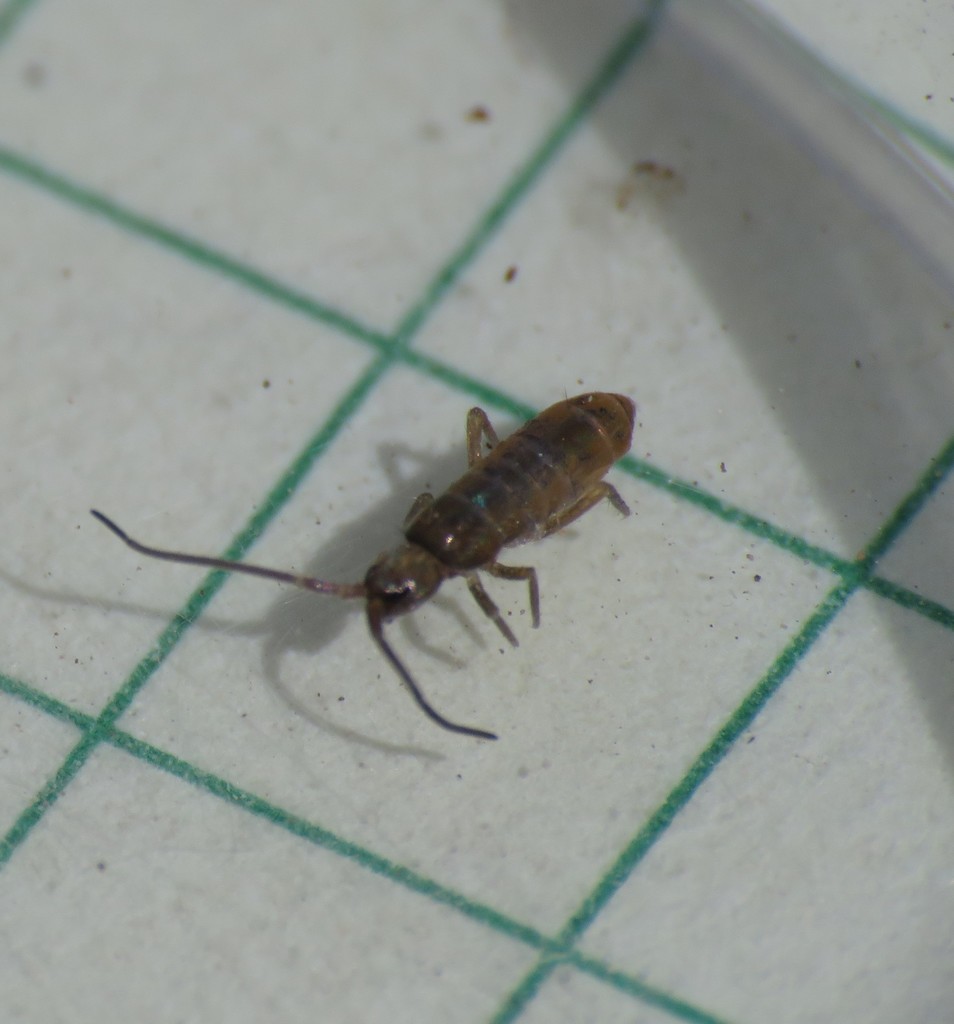 One of the beetles that sometimes see in the spring on the spruce stump is in the genus Lacon. Here's a picture that I took a few weeks ago. 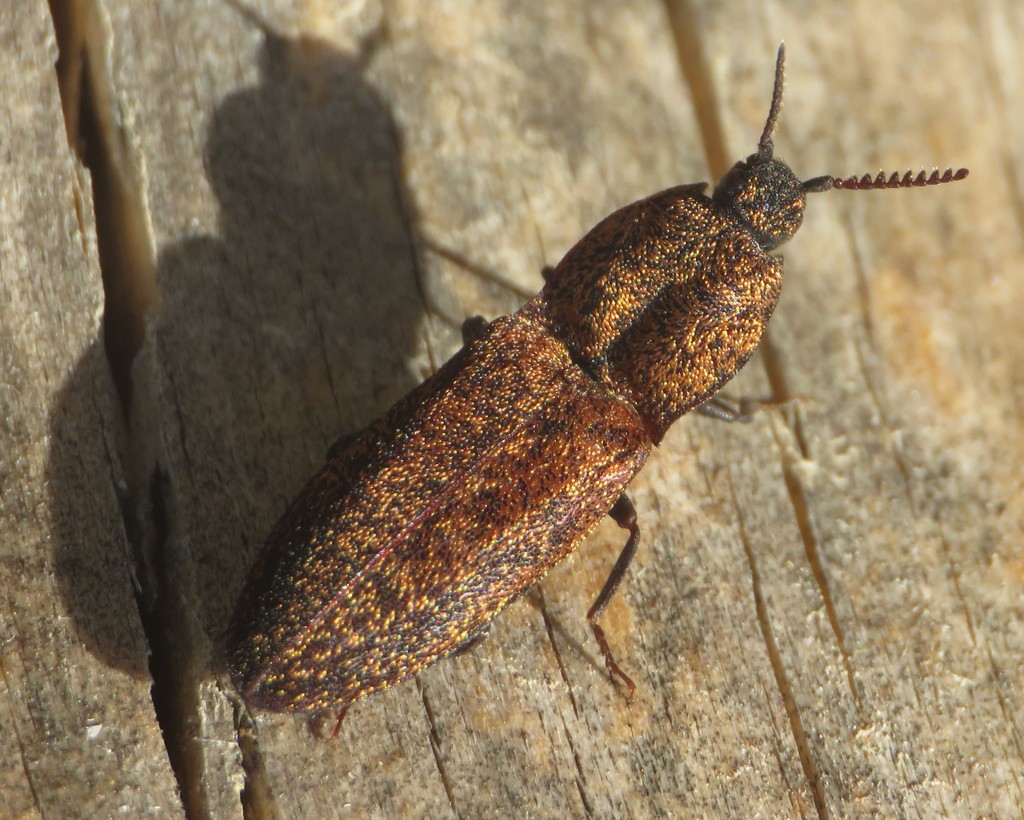 It was identified to genus on iNat by a click beetle (Elateridae) specialist. But he couldn't identify it to species without a photo of its ventral side.

But today I saw a few of these beetles out doing what beetles like to do this time of year. 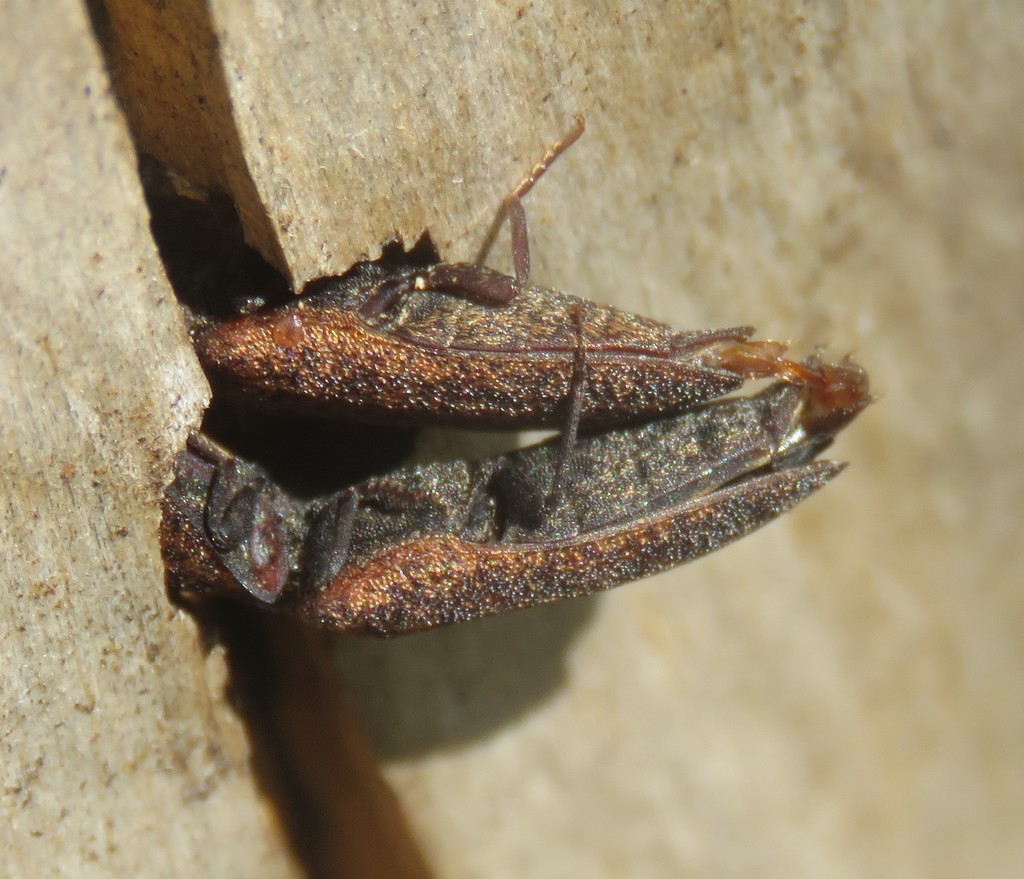 I caught one, cooled it down in the fridge, and took its picture, including one showing its ventral side. 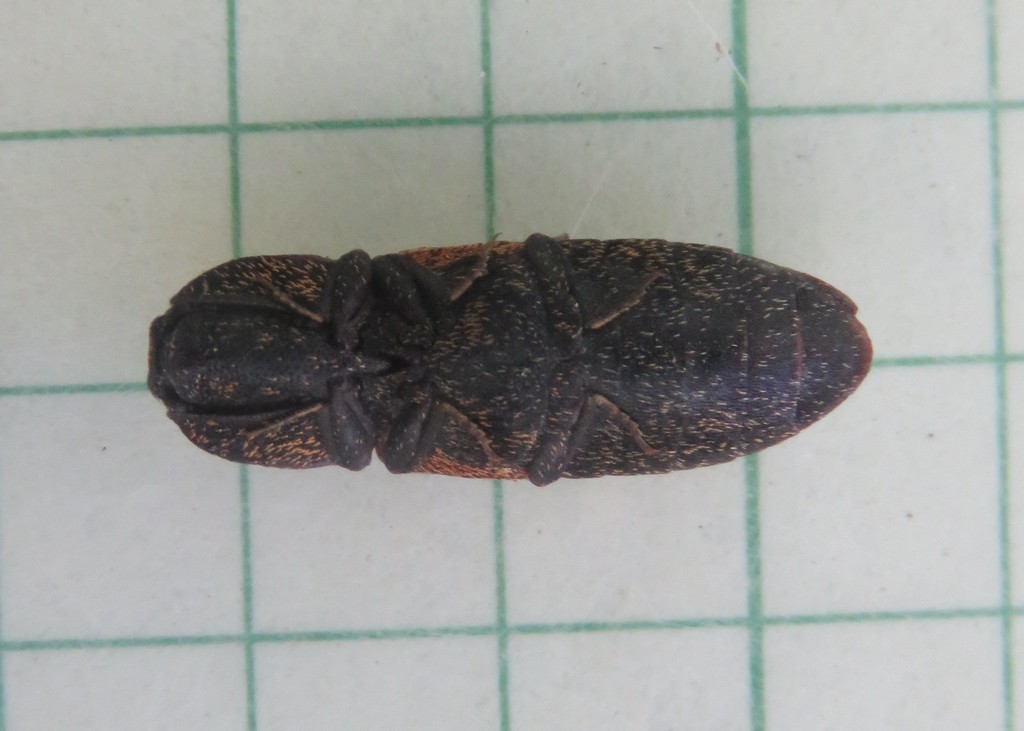 And an hour or so later the same expert (the iNat curator, Blaine Mathison) identified it as Lacon rorulentus.

I was a bit worried at first that I'd killed it in the fridge, since it lying on its back, completely immobile. But while I was trying to turn it around, it suddenly clicked away and I lost sight of it.

I've noticed these little flies (~ 3 mm) before on the compost pile, but hadn't taken a picture of them. Until today. 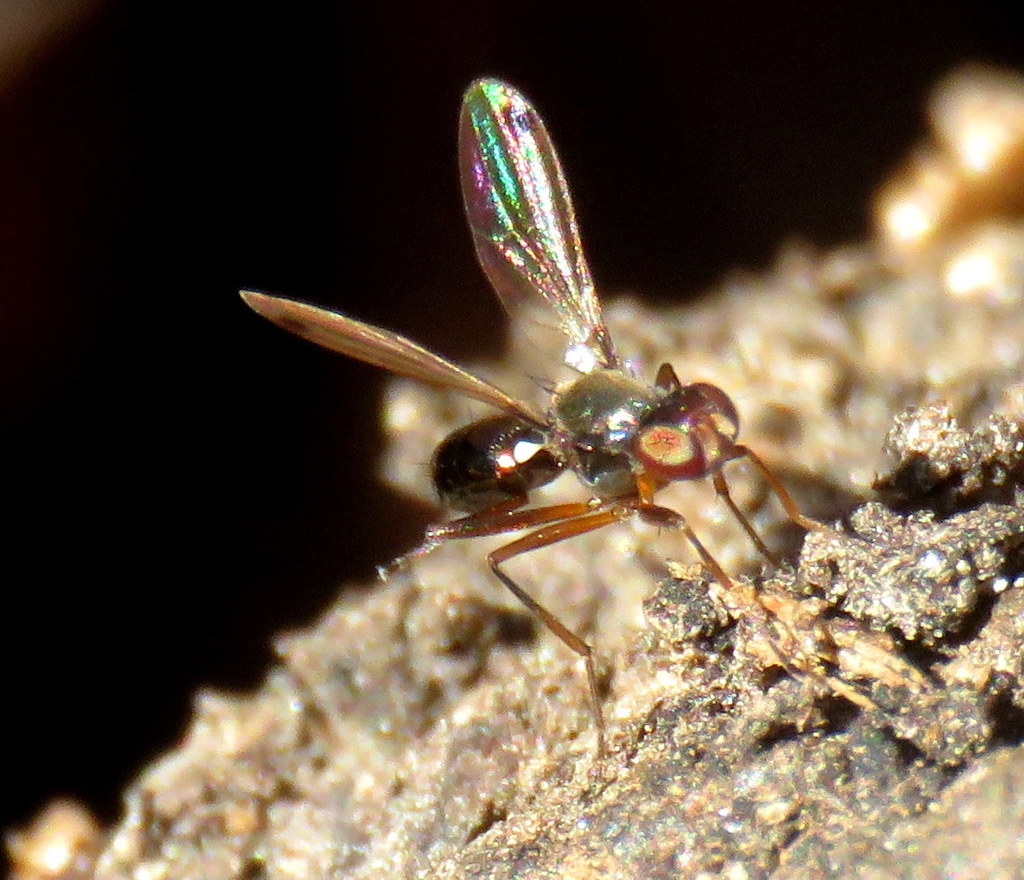 It's not a very good picture, though, so I don't know if it can be IDed any further than family (Sespidae).

I'll try to get a better one tomorrow.

When if visited the stump today, I noticed a Pine Trogossitid Beetle poking its head out of a hole. When I came a closer to look, it went back into the hole. But after a few minutes, it came out again and so did another in a nearby hole. And here's what happened next.

It was all over in another few minutes and the beetles returned to their holes.

Okay, this isn't really a new species at LQA. I see them every spring, flitting around near the ground. I caught this one with a food-cover net, cooled it down in the fridge and took its picture.

I sent the photo in to BugGuide and they identified it to the tribe level - which is pretty good for a Dawin wasp, since there are 25,000 known species and probably another 50,000 or so yet to be discovered.

Last year on April 21, I took these pictures.

I haven't yet been able to see what they're up to besides having sex, but apparently they are parasitoids of moth caterpillars.

Last week I bought a half of a cubic yard of sand to distribute around for bee and wasp nesting habitat. I put some of it next to the sidewalk next to the front garden. And today I saw a Cutworm Wasp (Podalonia sp.) on the sand with a caterpillar.

When I first saw her, she appeared to be stinging the caterpillar to paralyze it. Then she left the immobilized prey and began to search for a place for a nest.

Within a few minutes she'd found one, about a foot away, and began to dig. After digging a few inches down, she left the hole and began to look for another place. She did this three times, aborting the effort each time after a few mintutes of digging. I suspect the problem was that the sand was too shallow, and she didn't like digging in the gravel that was under the shallow layer of sand.

Finally, after her fourth attempt, she returned to the prey and began to drag it to the hole that she'd dug.

After dragging the caterpillar into the hole (and presumably depositing an egg on it), she quickly covered the entrance to the hole, so it could no longer bee seen.

The whole process took about 45 minutes. Then she was off to hunt for another victim.

Later, while turning the compost pile (for the first time this year), I saw several male Golden Dung Flies (Scathophaga stercoraria) hanging around. One was posing nicely, so I took its picture.

It turns out that it wasn't alone.

And it was blowing a bubble!

From what I've read about these flies, they only mate and oviposit on dung, but I guess our neglected compost pile was good enough for them.

Today I found a Picnic Beetle (Glischrochilus fasciatus) in the compost.

This is an LQA first for the Nitidulidae family (Sap-feeding Beetles). Which, of course, means that the genus and species are also LQA firsts.

This species occurs mostly in the eastern part of the US. It's the first observation in Idaho on iNaturalist. 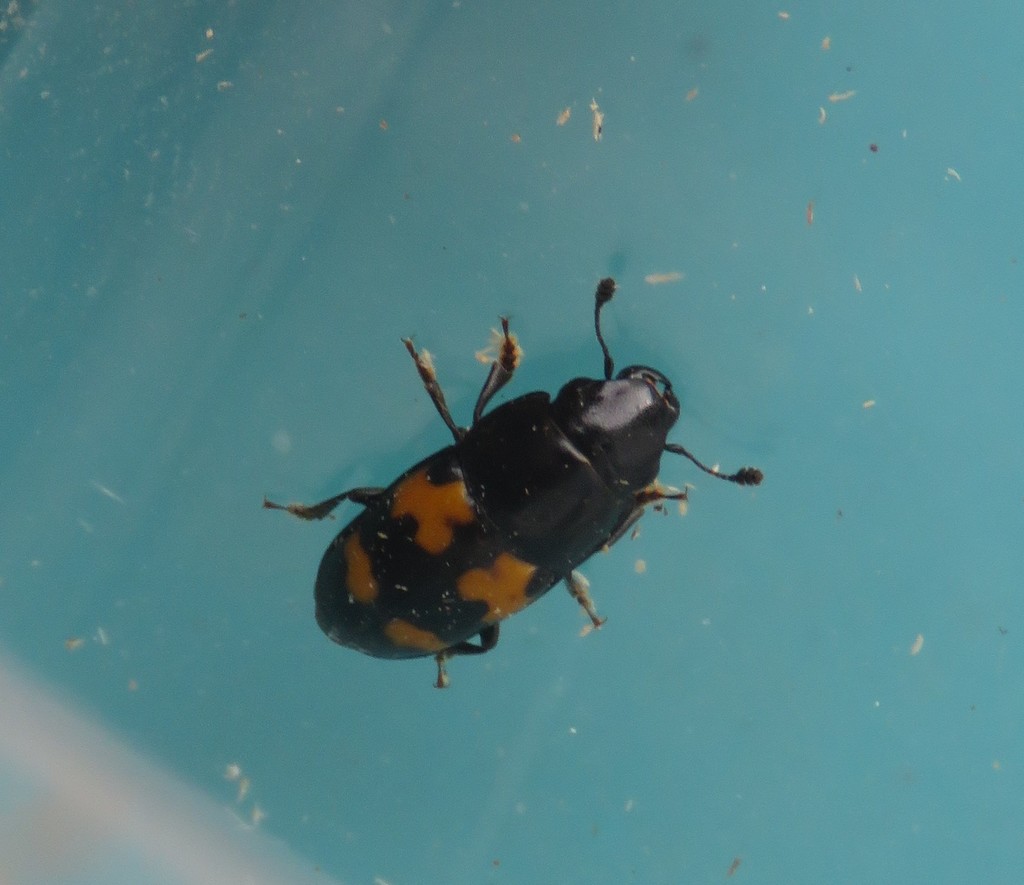